I visited the Newseum yesterday with several folks from Vox Optima, the first time I’ve seen it the museum in it’s relatively new location on the 500 block of Pennsylvania Ave. N.W.

Among the great exhibits was Covering Katrina, on display until September. It’s a very moving series of displays that included front pages from throughout the initial period of the storm, examinations of the reporters covering the tragedy, and, for those overcome by some very powerful images, boxes of tissues at the end of benches.

Said Jim Washington, a former reporter for The Virginian-Pilot and my colleague at Vox:

It was pretty amazing. I was surprised how emotional the Katrina exhibit was, especially since its a news story we’ve been exposed to for so long.

A great museum. Worth checking out if you’re in D.C.

A view from one of the upper levels. To the left is a recreation of the office of the late NBC journalist Tim Russert. Vox Optima photo.

Jane Howard of the Newseum discusses the ABC This Week studio in the museum in Washington D.C. on Tuesday. 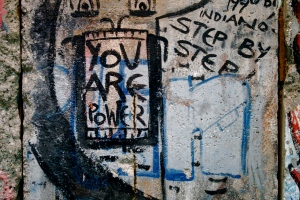 Detail of a section of the Berlin Wall, on display at the Newseum, Washington D.C., on March 15, 2011. Vox Optima photo.