Brightening up a special place for kids 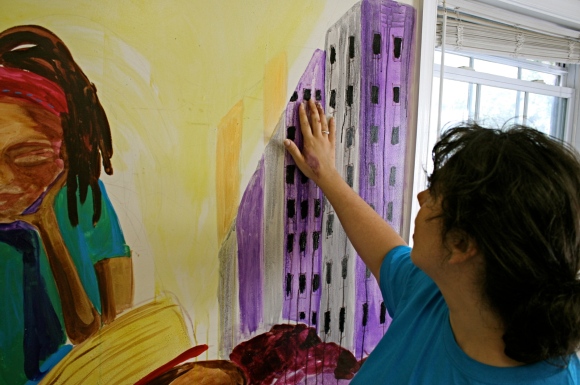 Artist Angelina Maureen shows her mural, then in progress, at The Dwelling Place, a family shelter in Norfolk, Va.. Photo by John Doucette.

Volunteers painted the rooms this past weekend at one location of The Dwelling Place, a family shelter program in the Norfolk, Va., area.

Eunice Harps, the house manager, stopped out back to see how the painting was going. Several volunteers were painting trees and books and a cityscape. She said:

I thought you were just painting. You’re doing art work.

The volunteers made murals at the shelter location, one of two run by The Dwelling Place.

She said it would be a safe haven for the children – and added that the shelter could use donations of books, especially those for teens and preteeens.

The Dwelling Place also needs other kinds of donations, and they won’t say no to money, either.

Angelina Maureen, a visual artist who I recently met through Kerouac Cafe, where she is the artistic director, was among the volunteers working at the shelter.

Her mural was still in progress, but it showed a young girl reading a book.

The girl in the mural seemed to rise above a city street like a tower.

In-progress murals at The Dwelling Place.