Books: The 3800 block of San Diego’s 5th Avenue in Hillcrest

Bookseller Jan Tonnesen thumbs through a first edition Dr. Suess book at 5th Avenue Books in San Diego, Calif., earlier this month. Fifth Avenue Books is one of two terrific bookstores on the 3800 block of 5th Avenue in the Hillcrest area. The other is Bluestocking books, almost directly across the street. Photo by John Doucette.

SAN DIEGO, Calif. – Folks here said the number of bookstores in the city has dwindled in recent years, but I had time during a recent work trip to visit two terrific shops on opposite sides of 5th Avenue in the Hillcrest area – 5th Avenue Books, which sells used, and Bluestocking Books, which sells a mix of new and used.

The former Borders location in Gaslamp notably lay empty, which is not unlike an awful lot of towns, but a big recent loss for rare and used book hunters fond independent sellers was the ultimate shuttering of Wahrenbrock’s Book House, following the 2008 death of its owner. But a few shops are still going, including in and around Hillcrest, and I keep hoping people will rediscover the joy of going to a cool bookstore and finding either something wanted or something you didn’t know you needed.

With 5th Avenue and Bluestocking so close, I urge them to mate and make some beautiful new bookstores. I’m not 100 percent certain of the science behind my proposal. Regardless, the Hillcrest Town Council should petition the City Council to fund the purchase of a huge scented candle, as well as the rental of a Commodores cover band to play an autumn evening set in the middle of the avenue. Just see where it goes, San Diego. Let’s see them try to resist the silky allure of 1978’s “Say Yeah.”

Anyway. I visited Bluestocking first, where owner Kris Nelson said the store’s name roughly means “oddball,” and also refers to an intellectual woman. There’s also a brief history of the term at the store site. The number is (619) 296-1424, and they have a Facebook fan site at this link. I browsed fiction, mostly, then compulsively bought a Tim Seibles poetry collection, which you can look forward to among the prizes for next year’s Fortune Cookie Fortune Writing Contest. Say, did you hear about the National Book Award nominations yet? Still cool.

Nelson said the store has a fairly simple philosophy:

Come as you are. Dress how you want. Why can’t we all just be equal?

She’s had the store for 13 years, though there’s been a bookstore here since the 1960s.

She even met her husband here in the store, when he showed up for a poetry reading and then bought a book. The store is doing well, she noted, in part due to the shuttering of Borders — similar to what I heard at an independent store in Rhode Island last year.

We’ve seen a bump. We’ve also seen a bump because some of the used stores have been closing, which is sad.

A lot of the bookstores we used to have closed, but so has Borders. There’s one Barnes & Noble, and they’ve really cut back.

In addition to new books, Bluestocking has taken on services such as handling magazine subscriptions. Said Marie:

It boils down to where can [customers] get the services they need? And that’s what lets us grow. There’s still growth happening, but its stores that are really service-oriented. 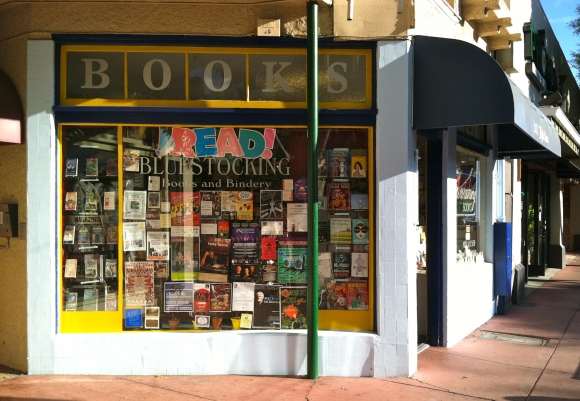 I didn’t have time to venture out to other recommended shops — Adams Avenue Book Store in Normal Heights and D.G. Wills Books in La Jolla [the latter has a Loeb Classical Library and Western Philosophy wall and, man, check out their YouTube channel] — but I loved San Diego like stupid loves low expectations. I aim to be back, and also aim to check these spots out.

That said, I found so much great stuff at Bluestocking Books and 5th Avenue Books, I ended up with a challenging carry-on situation for the flight back to Virginia. There are worse problems to have.

Across the street from Bluestocking, I spoke with Jan Tonnesen, a bookseller at 5th Avenue Books. He worked for three decades at Wahrenbrock’s before it closed.

Fifth Avenue Books holds down a big, open space at 3838 5th Ave., with some back rooms, too. The number is (619) 291-4660 and they have a Facebook fan page at this link. I ended up choosing some Modern Library volumes, including the first San Diego-bought book I started reading on the ride home — a very nice copy of The Decameron.

Tonnesen, back when he worked at Wahrenbrock’s, witnessed the late pop star Michael Jackson on a shopping spree there. His bill topped $1,700. This was by far the coolest story I heard in San Diego. Said Tonnesen:

I spent about 20 minutes alone with him in the rare books room. He wore a red silk shirt and a red surgical mask to match.

I suggested Tonnesen had a pretty good title for a memoir: I Spent 20 Minutes Alone with Michael Jackson in the Rare Books Room: A Survivor’s Story. Kind of sells itself. 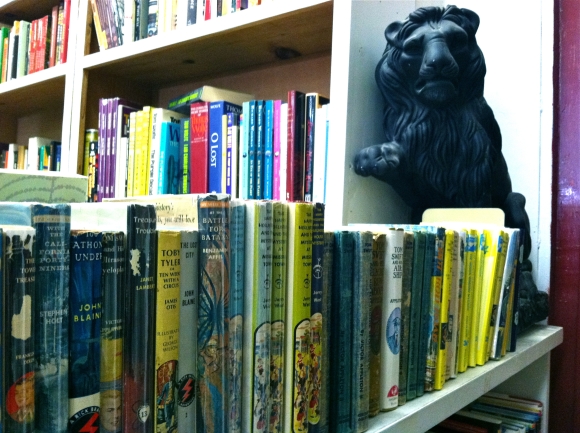 A lion watches over a bookshelf at 5th Avenue Books in the Hillcrest area of San Diego, Calif. 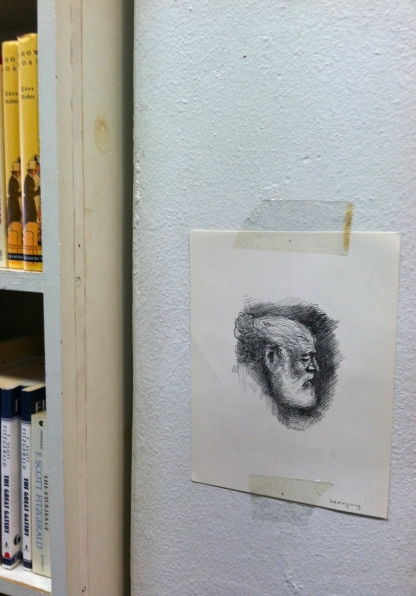 Some nifty sketches at 5th Avenue Books included this one of Papa.

The photos with this post are with my iPhone, so the indoor ones are a little grainy and blurry; sorry. But I want to make it up to you. I’m lighting a candle for you, bookstores.

And now it smells all like cinnamon, with just a hint of possibility.

Say, what’s that I hear from the middle of 5th Avenue?