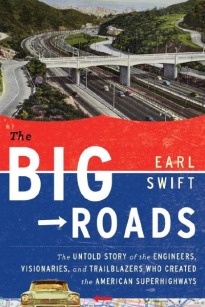 Norfolk, Va., author Earl Swift on Thursday will read, take questions, and sign copies of his new book,
The Big Roads: The Untold Story of the Engineers, Visionaries, and Trailblazers Who Created the American Superhighways.

Also, on Wednesday, June 29, Swift is scheduled to do an hour with Hampton Roads radio personality Tony Macrini on Newsradio 790 AM WNIS. Swift expects to be on at 9 a.m.

Swift, formerly of The Virginian-Pilot newspaper, is a journalist and author of Journey on the James, Where They Lay, and The Tangierman’s Lament and Other Tales of Virginia.

The Big Roads has received favorable reviews from Jonathan Yardley of The Washington Post, Patrick Cooke in The Wall Street Journal, and in The Pilot. It also is among the summer reading “treats” listed by the Charlotte Observer. Some other reviews are forthcoming this summer.

This has been an unusual experience for me. I’ve never had a book get this much attention.

For what it’s worth, that may be because it’s freaking terrific. Finished it last week. Highly recommended.

For those interested in inspired silliness, Swift recently participated in a Belligerent Q&A that can be found at this link, the most popular Q&A to date here. I hope to have more with Swift at the blog in the near future.