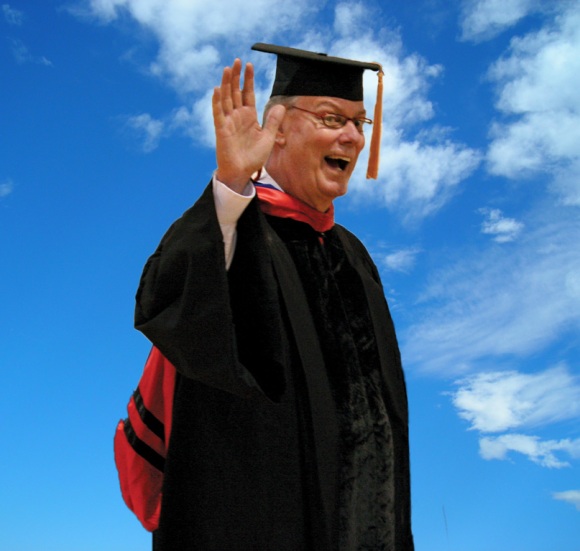 Dr. William Ruehlmann, a journalist and author who taught at Virginia Wesleyan College for 18 years, gives a wave and a smile. Photo illustration courtesy of Meghan See/The Marlin Chronicle.

Stories do not come to the writer. He must go out and meet them, and when he encounters one he must fasten himself to it like a fat man on a free lunch.

William Ruehlmann is an educator, a journalist, and the author of two terrific books, Saint With a Gun: The Unlawful American Private Eye and Stalking the Feature Story. For the past 18 years, he’s been a professor at Virginia Wesleyan College, teaching young people how to contribute to the world through writing and reporting. At VWC, he’s been the guiding force behind the award-winning campus newspaper, The Marlin Chronicle, and a longtime national leader in the Society for Collegiate Journalists.

He’s retired from VWC, which is why I am writing this. I was one of the fortunate students who gained practical knowhow, inspiration, and even a much-needed senior year kick in the behind from him. Students saw him off May 6 at the college, in a hospitality suite in which a projector showed picture after picture of an educator surrounded by his students. Naturally, we took more pictures.

I studied U.S. history at VWC after I got out of the Navy, but I spent a fair share of time with the communications students and contributed a few columns to The Chronicle. I remember discussion of reporting, fact-checking, ethics, and structure with Ruehlmann. His trust in students to make decisions when covering difficult topics. And how many of the stories written for his classes – rewritten and sometimes re-reported after his notes (always in green, as it is a less punishing color than the dreaded red pen) – were among the first that got me noticed by The Pilot.

I remember learning from Ruehlmann that writing, perhaps especially journalism, isn’t about the writer, but about the subject and those who will read what you write about it. In Stalking the Feature Story, he wrote:

Some egocentric scribes just can’t seem to prevent themselves from popping in and out of their copy like ‘Tennis anyone?’ types in midcentury melodramas. They interpose themselves between the reader and the subject, setting up a picket fence of I’s across their page.

Stay out of the story unless you affect it in some crucial way. Keep your eye on the material, not the mirror.

He led me to that water, anyway. I’ve tried to be as good as can be about drinking it.

Ruehlmann has a way of making the tough lessons a bit more tender. He is one of the first of many mentors and friends who have helped me learn that writing is something you need to feed in return – with fact, with judgment, and voices other than you own. When you get out of the way, and write at the service of the story, writing fulfills the writer. Better yet, it probably gets read and fulfills the reader.

Writing for Ruehlmann’s old paper, The Pilot, I returned to VWC in 2006 and spent time with The Chronicle staff while they made decisions about their coverage of a great tragedy, the murder of a security guard at the campus. Young journalists, many of them feeling the crime so profoundly, carefully consider each and every word they would publish. The decisions were to be their own decisions, with only the gentlest of guidance from their mentor. I remember a line from their editorial:

This past month, The Chronicle carried the news that Ruehlmann was retiring. The man ain’t done, The Chronicle reported. He’ll travel. He’ll keep writing his book column for The Pilot. He’ll write.

Ruehlmann, asked what he would miss about VWC, told The Chronicle‘s Kaitlyn Dozier:

The students. Unequivocally, absolutely, and entirely. I look around this newsroom, at the hundreds of students I have loved and who’ve loved me back. Yes, I will miss them greatly.

But he wasn’t just a good professor. He taught more than just classroom material. He showed me how not to be afraid of voicing my opinion, uncovering the truth, and sticking up for something I believe in. I honestly think that without Dr. R, I wouldn’t have uncovered my passion for journalism. I often catch myself thinking, what would Dr. Ruehlmann do?

I had a bit of a smile on May 6, when amid the party I first saw The Chronicle‘s report on Ruehlmann – the story of the heart and soul of that paper ran downpage, below the fold. The staff had led the edition with the new student government officers, a room squeeze, and so forth. You know – the news of the community.

Chances are, Ruehlmann would not agree that he was the heart and soul of The Chronicle. Were this post on paper, he’d probably write a note right here (in green, of course) about how it’s the students who breathe life into their newspaper. He might mention later, in the hall or as we passed on the wide field near the chapel, that the editors of The Chronicle played his story just right.

Ruehlmann taught classes called Advanced Newswriting and Feature Writing and what have you, but what he taught all along were judgment, skepticism, open-mindedness, passion, freedom, and that there is truth, or sometimes truths, that must be discovered and shared.

8 thoughts on “William Ruehlmann, journalist and educator, retires from VWC”