Leave a comment
By John Doucette Pop Culture, Uncategorized, Why We Have the Internet, Writing

Why we have the Internet, Vol. II: Disemboweled Tauntaun Edition 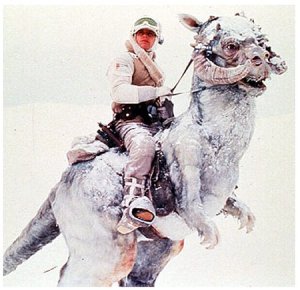 With George Lucas returning his Star Wars films, in 3-D, to theaters beginning next year, I’ve considered whether I should begin saving up for a ticket, rather than, let’s say, Old Dominion University tuition or food for my family.

Since I learned the first will be The Phantom Menace, I think I’m still state school-bound – in part, because I’ve found grad school as warming as the innards of an ice planet transport animal. Please click that link, and consider that this packaging come-on sounds an awful lot like sad, on-the-nose Star Wars dialogue:

Because, you see, they redesigned it.

I suspect the problem with the The Phantom Menace is that – in addition to already being repackaged and redeployed to theaters a few short years after introducing the subatomic suck bomb of Jar Jar – it lacks the vision of improving certain tie-in toys by disemboweling them.

Still, Star Wars remains a cultural touchstone, though some of the most interesting ideas from the SW universe are not Lucas-originated. Also, they’re online. Consider what a gift it is …

To order this and deliver it unto me, S&H be damned.

To look at this whilst considering the progress of man as expressed by our arts.

And to pity the owner of this.

Did someone order this?